With the new update, there are some changes to the build. Due to the introduction of highly tanky enemies like the Thrax Centurion, Thrax Legatus, Angels, and the newly Overguarded Eximus units, this is now a hybrid build, where both light and heavy attacks will be used. [True Punishment] gets us back up to high combo multiplier, at the cost of combo duration.

The reason why we use a hybrid build is to access the great amount of damage done by heavy attacks without resetting our combo. A heavy attack uses (1+combo)*5 as the damage multiplier, which comes out to 65x at 12x combo. The heavy attack also then applies a bleed proc that deals 2.1x the attack's damage as True damage, bypassing all damage reduction and armor, while still benefitting from damage multiplication of viral status effects. 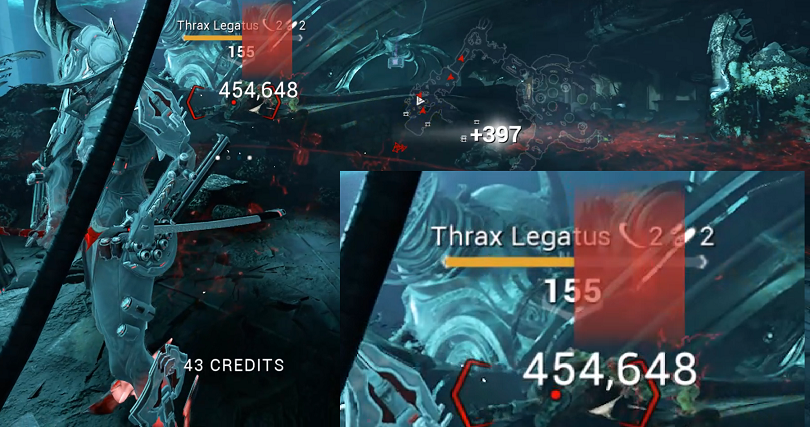 A bleed tick, buffed by viral procs and Mesa's 2. Over 6 ticks, this is a 2.7 million damage bleed effect.

Further, a heavy attack always inflicts a slash proc, unlike light attacks, which slash every 2.6 swings, meaning that in order as much True damage as a heavy attack, you'd have to swing your light attack on average 169.6 times. At a P. Fury +55% attack speed, that's about a minute and a half of light attacking vs damage all at once in one heavy attack. High-combo heavy attacks with Bleeding effects were always the best way to do the most damage fastest, it was just a question of whether or not it was worth building hybrid.

In the new content, high damage in a single burst is key for SP versions of eximus, angels, and Thrax enemies. Note that for eximus units, the slash proc will only affect them after the Overguard has been removed, so use light melee until the white bar is gone, then finish them with one heavy slice.

The drawback of decreased combo duration is not much of an issue for Naramon users, so that is recommended for a melee-prioritizing playstyle. Non-Naramon players will have access to Melee Guidance aura mod and Primary/Secondary Dexterity arcanes during the endgame, but will struggle keeping combo otherwise. A non-combo version of this build would drop BR, WW, & NW in exchange for SS, VS, & VF. While [Corrupt Charge] and [Focus Energy] could also be used instead of [True Punishment], moderate testing suggests that it feels nice to see the number go up faster, and in getting all the way back up to 12x, TP seems fastest.

Hybrid weapons offer a bit deeper gameplay than light-only gameplay. A pure light attack playstyle would be better served with PR/CO/GM/MI, or a Smite, but the hybrid is more variety, and cuts down the bigger enemies faster. A pure heavy [Nikana] build is viable with an initial combo riven, but that'd be better off as a Sepfahn to take advantage of Exodia arcanes. Melee 3.0's intended mechanics are in play here, with this build's rapid-fire light swings for clearing corridors and inflicting viral stacks, followed by the 12x heavy slash across a huge diagonal hitbox with enough raw damage to chop an Angel's healthbar in half. And then, if anything is left standing, the lingering bleed tick for millions of true damage.

The basic idea is to constantly be spamming melee, but switch between different types of combos. Switch between combos using W and Mouse2 as a combo selector. Use heavy attacks on heavy enemies to kill them in one hit. Also, this build is really spammy because of the high attack speed, so I recommend using mousewheel as a melee bind. I use scroll down for light attacks, scroll up for heavy attacks.

- [Blind Justice] combos:
Use all your combos. It looks cooler that way, and all of them are useful. Add some slide attacks and dash attacks to get mobility, and use aerial heavy slams for crowd control.

Dash-rolling is dead, but firedashing is here. If you use [Nezha]'s [Firewalker] during the [Blind Justice] dash, you'll do a firedash. Firedashing is a long horizontal leap that uses FW's jumping animation to maintain momentum. Works with [Blind Justice], but also works with Daggers and Dual Swords, anything with a high speed dash really.

Nikana Prime guide by hampstr updated a month ago

Nikana Prime guide by hampstr updated a month ago