[Caliban] is a fascinating frame with a solid toolset that can make him useful in a myriad of conditions including Steel Path. Unfortunately he's a pain in the ass to obtain, only available after beating The New [War] and each part blueprint is in separate bounty rotations, not to mention the unique material costs. His abilities are likewise annoying to build around, but are very strong when set up properly.

Razor [Gyre]: Garbage. Bad damage, split between impact and slash, removes most mobility, removes the ability to fire weapons or melee, has no damage scaling at all, removes the ability to cast his 3rd and 4th abilities. I've tried building around it and it's a complete joke. If its damage scaled with melee mods/combo like [Khora]'s 1 it still would be terrible but at least would kill things. It heals you when it hits an enemy but who cares. This ability needs major buffing/changes. Until it gets them, REPLACE THIS ABILITY IMMEDIATELY with a subsumed ability.

Sentient Wrath (SUBSUMABLE): Inversely, this is perhaps his best ability and people seem to rate it very highly on Overframe. It's an AOE that sends out shockwaves that damages, gives a damage vulnerability to, and lifts enemies. Good for crowd control, although perhaps more useful on Steel Path or tougher enemies. I'm unsure if it does anything to Liches/Sisters or Demolishers. This pairs very well with high range, and more strength increases the damage vulnerability.

Lethal Progeny: Summons a Conculyst, can be recast to spawn up to 3 at a time. Conculysts draw aggro, heal [Caliban]'s shields (and give overshields), and melee enemies. While their damage output is very mediocre, the shield [Regen] combined with Adaptive Armor makes [Caliban] deceptively tanky. Likewise, they possess health gating and sentient [Adaptation] like normal Conculysts. Good ability, although quite energy intensive if you want to have all three conculysts at all times. Also due to the fact you have to summon each individually all the time, [Natural Talent] is a good quality of life mod to have to speed up cast speed. By the way, in case you were thinking that the Conculysts might make Caliban invincible when using the Decaying Dragon Key shield gating strategy-- [Caliban] has a uniquely longer shield gating recharge and really high base shields, so it doesn't really work with him.

Fusion Strike: Laser beam attack that leaves a lingering AOE that strips 50% armor/shields permanently, up to 100% if ability strength is 200%+. Can wipe out weak mobs with damage alone, and severely weaken stronger mobs. Downside: costs 100 energy. This one singular ability makes [Caliban] enormously useful in Steel Path (although his CC is also valuable), although it's ridiculously taxing to spam it. Fusion Strike benefits from all of your stats, but it goes without saying strength is most important, so only one cast can strip 100% armor and shields. Casting speed is also nice too.

[Caliban]'s abilities are uniformly good and all very useful, except Razor [Gyre] which is a meme. The issue is his energy economy is horrifically bad. It's 150 energy alone to recast your Lethal Progeny, and you're recasting them every 25 seconds, not to mention the costs from Sentient Wrath and Fusion Strike and whatever subsumed ability you slap on him. Because of how much energy [Caliban] demands, you want just about anything you can get to mitigate it. Primed Flow for a bigger energy pool, Streamline and/or [Boreal's Hatred] for efficiency, [Energy Siphon] and the Zanurik focus school for energy regen, etc. Likewise, negative stats in general are inadvisable, ESPECIALLY the -55% ability efficiency from Blind Rage.

In order to hit the 200% ability strength threshold for the 100% armor/shield strip for Fusion Strike, I went with [Umbral Intensify] and [Transient Fortitude]. You might think you can get away with [Blind Rage] if you have the [Corrosive Projection] aura, but that doesn't work. The combination I went with has the least downside barring how annoying Umbral Forma is to get. Also I still end up with positive duration with [Primed Continuity] even after the duration hit from [Transient Fortitude]. [Stretch] is the best range mod you can get with no downsides, and as I outlined above in the review section, [Natural Talent] is a great quality of life mod for [Caliban], although [Streamline] is interchangeable here. One new mod from The New [War] update that's useful here is [Boreal's Hatred] with gives shields and ability efficiency, both of which are very useful for [Caliban]. Although, perhaps [Streamline] might be better but that requires another forma.

In the Exilus slot, I have [Cunning Drift] for more range, although there's a lot of options that are good here. You could throw [Boreal's Anguish] there to get more of the set bonus and a free [Aviator] defense boost, [Handspring], [Coaction Drift], [Speed Drift], etc. Whatever the situation demands.

SUBSUMED ABILITIES: You're getting rid of Razor [Gyre], this is without question. Dispensary might be good to deal with [Caliban]'s energy economy, Eclipse or Roar are good options to buff his damage, Elemental Ward can do a whole host of things, maybe [Firewalker] or Infested Mobility for movement, etc. Those are a few of my top picks. Alternatively you can slap on Aquablades and watch it put in more work than Razor [Gyre], and you can still use other abilities, move normally, shoot and pick up items! WOW! 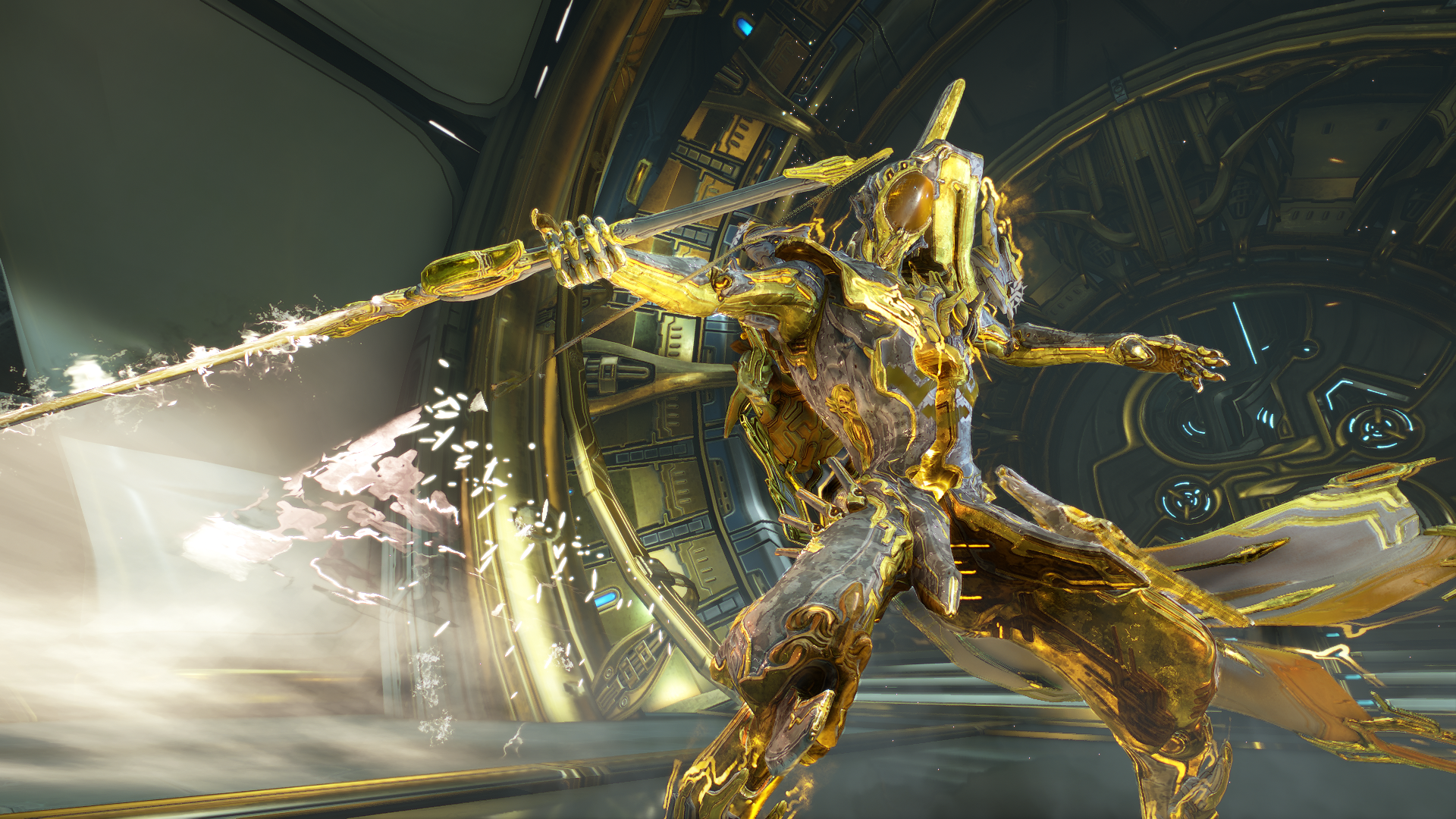